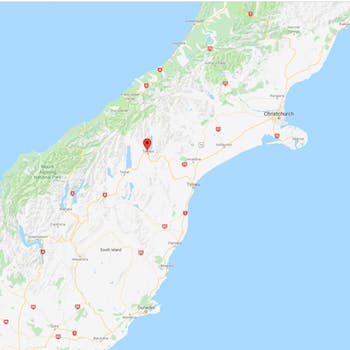 In the heart of the South Island, the Mackenzie Region is home to four glacier lakes including Lake Tekapo, with magnificent mountain backdrops, golden tussocky flatlands and incredibly clear and starry skies above. LOTR fans will recognise this landscape as being where epic battles of Return of the King were filmed.

It’s quite classically Kiwi that the region now thought of as the pinnacle of high country farming was named after a sheep rustler. In 1855, James Mackenzie stole 1000 sheep and headed to these hills to evade the law. The old rogue was caught, imprisoned, escaped twice and in doing so became a folk hero of the time. Nowadays, the landscape bearing his name makes it into the hero shots for many of our tour guests’ South Island adventures.

Lake Tekapo is fed by the 12 nearby glaciers which as they melt and shift, slo-o-o-o-wly grind rock into dust particles. The dust – called glacier flour though it’s probably not good for baking – mixes with the water and produces the intense milky-turquoise colour you see in Tekapo and nearby Lake Pukaki. In Spring, colourful lupins surround the lake and the pink and lilac blooms make for a lovely contrast against the blue. Read more about the Lake Tekapo tour stop in our blog post. The largest of the four glacier lakes, Lake Pukaki provides brilliant views of Aoraki/Mt Cook – New Zealand’s highest peak. While we’re in the area, you can opt to take a scenic flight over Aoraki /Mt Cook and Westland National Parks and see the 12 glaciers that feed the lakes.

CHURCH OF THE GOOD SHEPHERD

Tiny but totally gorgeous, the iconic Church of the Good Shepherd sits on the southern shore of Lake Tekapo. Built as both a place of worship and memorial for Mackenzie's pioneering families, The church’s charming stone façade framed by the brilliant blue of the lake and the Southern Alps is picture perfect and we’ll always stop here to get a few hero shots (there’s no photography inside the interdenominational Church). You may notice a bronze statue of a border collie dog nearby – it’s a tribute to the high country farm dogs “without the help of which the grazing of this mountain country would be impossible”. Awww!

As stunning as the Mackenzie Region is by daylight, it really shines at night – shines with the light of millions of stars! Clear skies, high altitude, a big body of water and lack of artificial light pollution make this one of the darkest places in New Zealand and it’s the perfect place to do some star-gazing. So perfect, in fact, that it holds international recognition as a Dark Sky Reserve.

Watch the heavens above rotate, gaze at the Milky Way glittering across from one horizon to the other, and be awestruck by how vast the visible universe is! If you’re travelling with us between April and September, you may be super lucky and witness the Aurora Australis (Southern Lights) coming out to play at the Tekapo Dark Sky Reserve.

A week with wow factor! Tick off iconic South Island destinations with unbeatable scenery and a large dose of adventure.