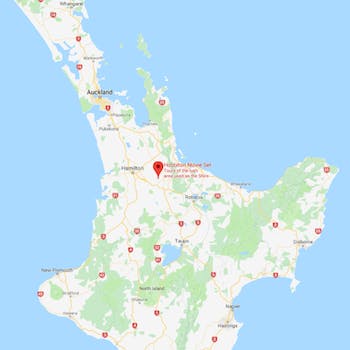 Once a small rural township of very little note (except to local farmers and horse breeders), Matamata has become world famous due to a nearby farm which was the filming location for parts of the Lord of the Rings (LOTR) and Hobbit trilogies. After filming ended, part of the working sheep farm has been turned into a top New Zealand visitor attraction: Hobbiton. Fans and those who enjoy seeing the incredible attention to detail that went into making these blockbuster movies leave Hobbiton feeling like they’ve had a visit to a story-book world, which is literally quite true!

New Zealand often doubles for Middle-earth, the fantastical realm created by J.R.R. Tolkien in his classic Lord of the Rings and Hobbit books which were then turned into cinematic gold by New Zealand’s own Sir Peter Jackson. However, nowhere else quite captures the magic of the movie-making phenomenon as this place which is synonymous with The Shire.

Visitors to the 12-acre movie set will be delighted that they can walk in the footsteps of hobbits along pathways that wend between rolling hills, grassy meadows, and wander across double-arched stone bridge over a small lake so that they can stop by the Mill, the Party Tree and over 40 circular doorways to hobbit holes including Bag End! Of course, no journey to Hobbiton would be complete without a stop at The Green Dragon Inn where you can enjoy a tasty beverage only available in this part of Middle-earth on a Hobbiton tour.

If you’re a mega-LOTR fan, you may want to dress up for the day – we’ve even heard tales of super fans speaking Elvish during their visit! The wonderful thing about Hobbiton is that no matter what time of year you visit, it is always so picturesque, but our [Haka guides](https://hakatours.com/about-us/our-people especially love to see The Shire in Spring (September through to November) when the Hobbit gardens are in full new-growth swing.

Matamata town itself has embraced its role in helping fans experience Hobbiton; giving its information centre (now named The Gatehouse) a Hobbiton-esque makeover and giving pride of place to a statue of Gollum depicted with fish in hand at the Forbidden Pool. Sharp-eyed visitors will also spot Hobbit Sushi and Strider Shoes (Strider is the alias of Aragorn), and there’s even a bar with a pizza menu featuring LOTR-themed options such as Bilbo’s Patch and Sauron’s Fury. While we don’t technically visit this North Island rural town, it is the location of one of our most popular add-on activities so we just had to put it on the map.

The working farm that is the location for Hobbiton movie set has views across the Matamata region and across to the Kaimai Range. If you’re lucky, you may catch a glimpse the North Island’s largest waterfall in the of the foothills ranges. WIth two drops, one of 91 metres and one of 60 metres, the Wairere Falls is an impressive sight.

If you’re a true J. R.R Tolkien fan you may already have the date that honours the birthdays of both Bilbo and Frodo Baggins circled in your diary. At Hobbiton Movie Set, Hobbit Day is celebrated with an evening of food, fireworks, dancing and much merriment – just like the party that sets the scene in The Fellowship of the Ring! If you’re far from the Shire on this date, you can always celebrate by going dancing barefoot in honour of the shoeless hobbits.If you are looking for a New Zealand Lord of the Rings tour this is the place to visit!

Enjoy adventure activities, incredible scenery and fascinating Māori culture as we show you the highlights between Auckland to Wellington.

A sample platter of North and the South Island highlights including the Coromandel, Tongariro, Rotorua, Kaikōura & Christchurch.