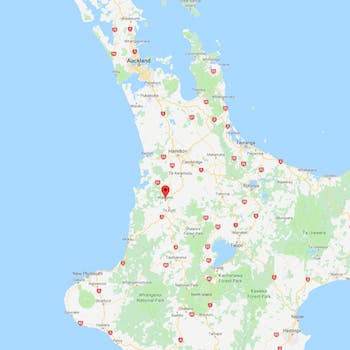 Beneath the rolling green hills of Waitomo in the North Island region of south Waikato there are around 300 limestone caves, but the star attractions are the caves where you can view a galaxy of glowworms twinkling, and take the opportunity to try black water rafting. Waitomo’s impressive underground cave system was formed over 30 million years ago when the land was under the sea. In Māori, wai means water and tomo means cave or hole Although Haka Tours do not provide a Waitomo caves tour from Auckland, we do have Waitomo activities available for those on tours which stop in Rotorua with transportation to and from Waitomo included in the activity cost.

The glow worms caves of New Zealand’s North Island are a highly popular attraction. There are two ways to see the caves and glowworms, one is easy access and dry, the other is a bit more intrepid and you’ll get wet! Either way, you’ll be able to admire amazing stalagmites and stalactites and underground rivers and rock formations, but you’ll also see a galaxy of tiny living lights on the cave’s ceiling. Opt to take New Zealand's longest guided subterranean walking tour and learn about the natural and Māori history of the caves. On another option you can sit back and enjoy a gentle boat ride through some of the cave. For the most adventurous option you get to don a wetsuit, abseil 37m down a dark cave and explore an underground river system through a combination of walking and floating on inner tyre tubes through glowworm lit caves.

New Zealand glowworms (or Arachnocampa luminosa for the geeks) are not actually worms but the larvae from a small type of fly called a fungus gnat (similar in appearance to a mosquito). glowworms use their glowing lights to attract smaller flying insects into a snare of sticky threads. The Māori word for glowworms is Titiwai, or light reflected on water.

Weird fact: the green-blue light you see is shining from the glowworm’s kidney! Ewwww! But it’s still a spectacular natural wonder that you won’t see anywhere else.

Did you know that limestone is a type of rock mainly formed from the skeletons of sea creatures? So remember when you’re in the Waitomo caves that you’re looking up at the light of thousands of maggots’ kidneys within a cave made from starfish, crabs. molluscs and seahorses who died over 30 million years ago when this land was under the sea! Nature sure is buzzy!

Enjoy adventure activities, incredible scenery and fascinating Māori culture as we show you the highlights between Auckland to Wellington.

A sample platter of North and the South Island highlights including the Coromandel, Tongariro, Rotorua, Kaikōura & Christchurch.